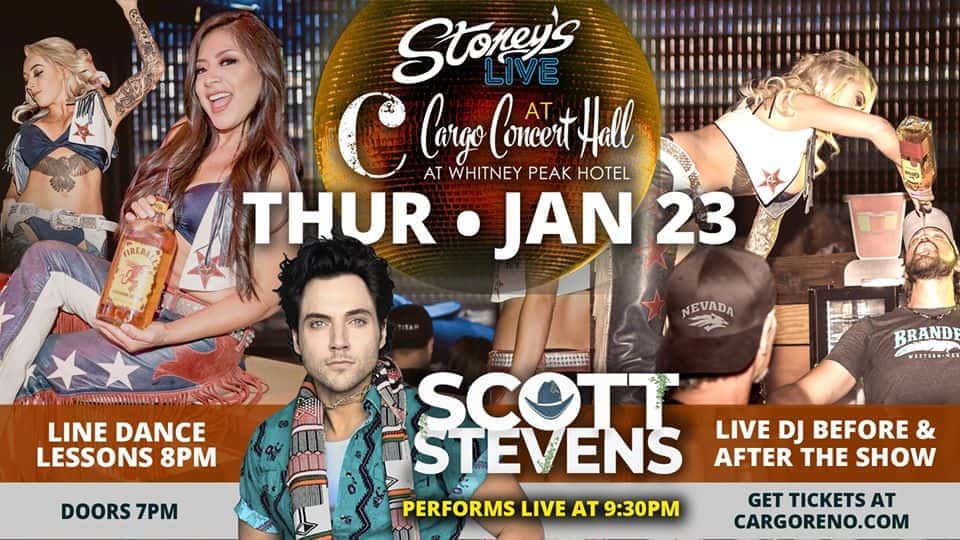 Experience the World Famous Stoney’s from Las Vegas right here in Reno and Cargo inside of the Whitney Peak Hotel!

Bringing the Stoney’s atmosphere that includes

A little something about Scott Stevens:

“It’s groove centric country with a rock and roll soul.”
Says singer-songwriter Scott Stevens, when asked to describe his sound. He adds “Lyrically, I write only what I’m feeling. Sometimes that means covering some uncharted territory – espescially in the country format.” In that regard at least, Stevens arguably could be considered the new outlaw country.

He grew up around the East Tennessee Smoky Mountain area surrounded by all things music. Mom led the church choir, Dad played with the Talking Heads and Joe Walsh of the Eagles. “My mom was always singing and my dad always had a few badass guitars hanging up on the wall. I wanted to be like them” says Stevens. “And I started writing because well, my mind kind of never stops thinking about shit, so I found that it helped to write things down” the self proclaimed ‘lyric-centric’ writer adds.

Stevens and his band (guitarist Tim Pasley and Drummer Nico Medina) forde the river of a sound they call country groove rock. “It’s music you can feel in your bones, my man.” Stevens says. The sound is just as much Doobie Brothers, Steve Miller Band, and Queen as it is a nod to country staples like fresh faced John Michael Montgomery and Kenny Chesney. The live show is a hazy and fucking wild rock & roll party that starts with shot from Mick Jagger and a toke off Eric Church.

Stoney’s Rockin’ Country is the hottest country nightspot this side of Texas. Located on the world famous Las Vegas strip with 12 years of Country Fun experience in the enteratainment capital of the world!

*Please remember that all sales are final. No Refunds or Exchanges available unless show is cancelled*