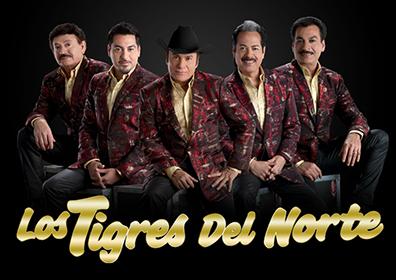 In the diverse world of Latin music, the regional Mexican genre alone accounts for more than half of all music sales, outpacing the combined sales of pop, rock, tropical, urban and all other styles and Los Tigres del Norte are the undisputed legends of the genre. With more than 500 recorded songs to their credit, Los Tigres del Norte have sold over 37 million albums worldwide, while notching 22 #1 albums and more than 50 #1 singles. The group has received countless Platinum records and numerous awards including multiple GRAMMY™ and Latin GRAMMYs™, the Latin Recording Academy’s Lifetime Achievement Award and the Hispanic Heritage “Legends” Award at The Kennedy Center.

Even after an unrivaled four-decade career, Los Tigres continues to be at the forefront of Latin music popularity, still performing regularly to audiences exceeding 100,000 a night, debuting at #1 on the charts with each album and single they release and continually blazing new trails for the genre. The band’s recent milestones include headlining Mexico’s historic bicentennial celebration, being joined by numerous members of Congress while heading the massive Camino Americano immigration rally and march upon the National Mall in Washington DC and the release of the first “MTV Unplugged” album dedicated to the regional Mexican genre.